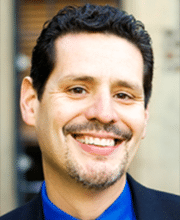 Rev. Dr. David Vásquez-Levy serves as President of Pacific School of Religion in Berkeley, California –a progressive, multidenominational seminary and center for social justice that prepares theologically and spiritually rooted leaders to work for the well-being of all.  A committed pastor, a nationally recognized higher education and immigration leader, and a sought after speaker, Vásquez-Levy leads at the intersection of faith, higher education, and social change.

Vásquez-Levy is committed to innovation and access in theological education and leadership formation.  He serves as convener for the GTU Consortial Council, is co-founder and convener for the Latinx Presidents and Deans of ATS schools, and is a member of the executive leaders group of AshokaU campus network and the Asociación para La Educación Teológica Hispana (AETH).  He also serves on the board of Church World Service, one of the largest ecumenical development agencies in the world, and the Advisory Council for Encore.org.

Vásquez-Levy has lived in four countries, including working on refugee resettlement in Canada, and taught courses and led international study and service trips across the globe.  He holds a Bachelor’s Degree in Computer Science from Texas Lutheran University and a Master of Divinity and Doctor of Ministry degrees from the Lutheran School of Theology at Chicago, including studies at Ludwig Maximilians University in Munich, Germany.