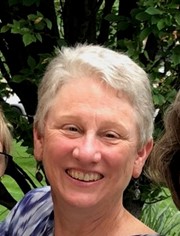 The Rev. Loey (Lois) Powell is retired from ministry in the United Church of Christ and enjoying the time to reflect, renew and spend time with her spouse, Brenda Joyner. Loey graduated from PSR with a Master of Divinity in 1977 at a time when increasing numbers of women were entering seminaries and the ministry, feminist and liberation theologies were breaking new ground in the theological world, and a small but growing number of out LGBTQ + clergy were pushing the boundaries of convention. Loey was ordained by the Golden Gate Association of the UCC in 1978 in a first-ever collective ordination with PSR alums Jody Parsons and Stacy Cusulos. Over the years, she has served in non-profit ecumenical organizations, in regional, interim, and new church start ministries, and as pastor of the United Church in Tallahassee (FL). Her call to UCT in 1989 was the first time an out clergy person had been called to a sole pastorate in the UCC going through the regular channels of search and call. In 1997, Loey served as the last Executive Director of the Coordinating Center for Women in Church and Society, becoming the first out lgbtq executive on the Council of Instrumentality Executives of the UCC. When the national offices restructured in 2000, Loey was a Team Leader in Justice and Witness Ministries with responsibility for justice for women, just peace issues, and leadership development, and did a stint as the Executive Associate to the General Minister and President. After her official retirement, Loey worked a couple of contract stints with the UCC’s Council for Health and Human Services Ministries. All that said, it’s been a lifetime of engagement in the UCC. Loey lives in Cleveland Heights, OH, and enjoys cooking, good wine and golfing with Brenda whenever weather permits.