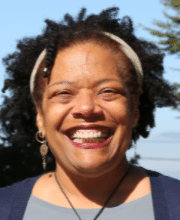 After more than a decade working in the fields of telecommunications and information technology as a communications tech, systems analyst, and trainer, Grace Gilliam realized that just because you’re good at something doesn’t mean that’s what you’re meant to do. This led her to an exploration into what vocation would engage the Buddhist principle of work to alleviate the suffering in the world.

After studying Contemplative Psychology at Naropa University in Boulder, she completed her Master of Theology at PSR, with emphasis in Psychology and Religion, in 2010. Grace joined the staff at PSR as Associate Director of Field Education and Contextual Learning in 2012. She now serves as Associate Director of Community Engaged Learning. During her time at PSR, Grace has been able to name and express her calling as an Ad-Minister. A practicing Buddhist, she took her Bodhisattva Vows in December 2017 at East Bay Meditation Center, in Oakland, CA, and was given her Dharma name, “Shining Practice HeartMind.” She finds that both Ad-Ministry and Shining Practice are a continuation of her original call to being grace in the world.